Clues to Treating Tourette’s Syndrome May be Found in Marijuana

Clues to Treating Tourette’s Syndrome May be Found in Marijuana

Marijuana is leading the way to understanding a rare disorder that until recently was believed to have no cure. Tourette’s syndrome, which is evidenced by either chronic or transient motor (movement) tics or utterances (phonic tics) affects about .4% of children between the ages of five and eighteen. Co-occurring diagnosis often include OCD (obsessive compulsive disorder) and ADHD (attention-deficit hyperactivity disorder). Generally, the condition goes away by adulthood, but in some cases, it does not.

Genetic and environmental conditions play a role in Tourette’s syndrome, but the exact causes are not known. However, a number of studies since 1999 have shown that TS patients improved with the use of THC, with no cognitive impairment noticed. The findings were confirmed in the Journal of Clinical Psychiatry. 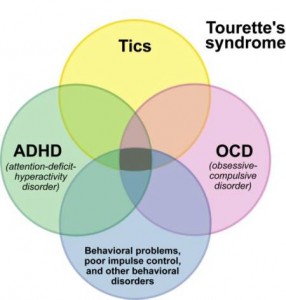 It is believed the condition is triggered by stress and anxiety, as the tics can be suppressed for short periods of time, but are often more intense when the effort to control them cease. In a 2003 clinical study, adult patients were given either a placebo or THC for six weeks, with significant reduction in the episodes of tics among those who were given THC. Researchers for clinical psychiatry concluded “therapy with delta 9- THC should be tried” (for adult patients suffering from TS). It also improved the conditions of OCD. They believe the calming effects of THC are what aids in relaxing the symptoms of Tourette’s syndrome.

It appears that the cannabinoids can modulate major neurotransmitter systems in the brain – including those involving GABA and glutamine. These pathways provide one hypothesis as to why THC is sometimes effective for the control of tics.

Scientific studies are now concerned with the body’s natural ability to produce endocannabinoids, which resemble the active compounds found in marijuana. Our bodies contain various enzymes that manufacture endogenous cannabinoids, with two specific receptors for cannabinoid substances located throughout both our bodies and our brains.

Stated Kirsten R. Muller-Vahl, M.D., Director of the Tourette Syndrome Clinic at the Medical School of Hanover, “currently the treatment of Tourette’s Syndrome is unsatisfactory. Therefore, there is expanding interest in new therapeutic strategies. Anecdotal reports suggested that the use of cannabis might improve not only tics but also behavioral problems in patients with TS”.

Other movement disorders discussed for treatment by cannabinoids are Huntington’s Disease and Parkinson Disease.