Sickle cell disease (SCD) is often called sickle cell anemia. It is a disease of the red blood cells (RBC) that is inherited. A person must inherit one gene from each parent in order to get SCD. Normal, healthy RBCs are disc-shaped, which is ideal for travel through the blood vessels. But sickle cell RBCs are just what they sound like – that is, they’re shaped like a sickle (a crescent-shaped farm tool used for cutting). This shape, along with the rigidity and stickiness of the sickle cells, makes it difficult and sometimes impossible for them to squeeze through the small blood vessels, and they can get trapped. This, in turn, prevents blood from reaching some parts of the body, causing tissue damage and pain, which when it occurs is known as a crisis. The rate of these crises varies from patient to patient, with some patients having painful crises frequently and others having them rarely. 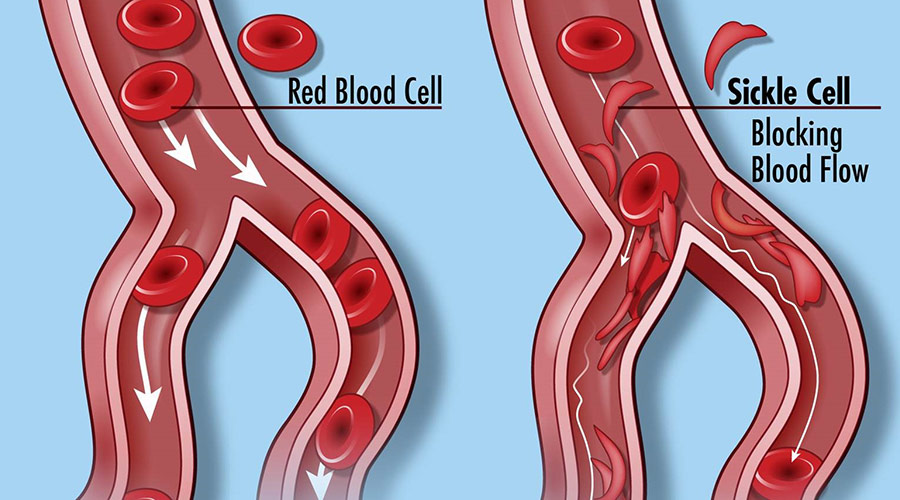 There are several types of SCD, with the most common being Hemoglobin SS. People with SCD have inherited copies of the hemoglobin S gene from both parents. If a person has inherited the gene from only one parent, he or she is said to have sickle cell trait, and not the disease itself. These people may have only mild symptoms or no symptoms at all. The people who are most likely to be carriers of SCD are those from areas where malaria is present, such as India, Africa, Saudi Arabia and the Mediterranean.

SCD often presents as acute pain in the hands and feet, although a victim may also be anemic, have severe bone pain, ulcers on the legs, heart problems, respiratory infections, and more. Treatments might include blood transfusions, pain medication, and oxygen; the latter which not only makes breathing easier, but also improves the oxygen levels in the blood. In very severe cases, bone marrow transplants may be required.2

Another troubling aspect is that few states list SCD as a qualifying condition for medical cannabis. This may change in the future though and in the meantime, some of the effects on patients that are caused by SCD, such as chronic pain, may be valid qualifying conditions. If you are curious about cannabis and sickle cell disease, work with a health practitioner who is knowledgeable in the area of medical marijuana.

Meeting with a doctor face-to-face is good, but if there are none nearby, many of these practitioners will do online appointments. Their expertise and guidance are very important in guiding you not only through the legal hoops, but in the cannabis strains, dosage, and method of delivery that are right for you. To get started, find out about the legalities in your state by using our interactive map.