Parkinson’s Disease (PD) results when nerve cells of a particular type, concentrated in certain areas of our brains, begin and continue to malfunction and die. The “job” of the affected nerve cells is to produce chemicals called neurotransmitters (including dopamine and norepinephrine) that function in communicating information from one nerve cell to the next. As nerve cells lose the ability to transmit information across cells, tissues, organs and organ systems, those systems begin and continue to fail.  We still don’t know the reasons for why the degeneration and death of those nerve cells begins and progresses. 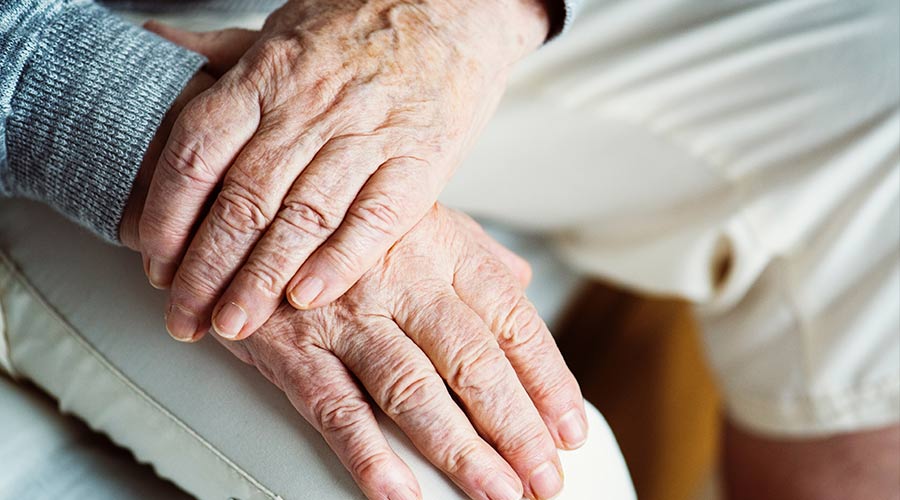 The symptoms experienced, and the rate of disease progression, differ among people, yet many of the symptoms of Parkinson’s are associated with movement (a type of bodily function requiring the coordinated action of lots of different cells). Such symptoms often include tremor, slowed movement (bradykinesia), muscle rigidity, postural instability and trouble speaking. There are many “non-motor” symptoms experienced by people with Parkinson’s  too; the most common include trouble sleeping, difficulty chewing and swallowing, loss of sense of smell, urinary and digestive tract problems, fatigue, pain, and issues with cognitive function, depression and anxiety. At the moment there is no cure for Parkinson’s; those with the disease are often put on medications that affect pathways involving the neurotransmitters in question, especially the medication “L-dopa” (levodopa; used by nerve cells to help make dopamine). Other medications help with non-motor symptoms and the side effects of L-dopa. Unfortunately, use of L-dopa for more than 5-10 years can result in irreversible dyskinesia (uncontrolled involuntary movement).

Research on the possible therapeutic benefits of Cannabis for those with Parkinson’s is still in its infancy, and most of the few studies suffer from small sample sizes and non-rigorous methodologies. It is the case, though, that almost all authors end their published papers with calls for more, larger, controlled studies, because early results suggest that some motor symptoms of Parkinson’s, and L-dopa-induced dyskinesia, may be positively affected by Cannabis therapies.

In studies based on surveys – where (small numbers of, and mostly male) Parkinson’s patients answered questions and provided descriptions but were not measured in any way – subjects medicating themselves with Cannabis (in most cases through smoking rolled flower cigarettes) reported improvement regarding falls, pain, depression, and muscle stiffness1, bradykinesia and dyskinesia9, and tremor1,9. Cannabis use was also associated with improvements in mood, memory, fatigue, and obesity status7. In these studies, the most commonly reported adverse effects of Cannabis use were coughing for those smoking cigarettes (35% of subjects1), and hallucinations and confusion (17% for each1).

In the lab, the phytocannabinoid ∆9-THC (an antioxidant) has been shown to have direct neuroprotective effects on the injured nerve cells of Parkinson’s patients (increasing their survivorship2,5). In addition, injection of ∆9-THC reduced muscle inhibition in compromised rats5, and so ∆9-THC looks to be a promising therapy for delaying neurodegeneration and alleviating some of the symptoms of Parkinson’s5.

Also in the lab, nabilone (a synthetic cannabinoid) lengthened the time over which L-dopa was active while also significantly alleviating levodopa-induced dyskinesia (in a marmoset “model;”4).

Another phytocannabinoid, CBD, has also been shown to provide relief for some Parkinson’s symptoms. As a treatment for psychosis, four men and two women (given adjusted dosages for four weeks) experienced improvement in rating scales (Psychiatric and Parkinson’s), with no adverse effects10. As a treatment for rapid eye movement sleep behavior disorder (RBD), four patients experienced “prompt and substantial” improvement in sleep as the frequency of RBD-related disturbances declined (no side effects3). In another study, although there were no significant neuroprotective or motor-symptom effects, on average, the seven patients given the higher of two CBD dosages reported significant improvement in well-being and quality of life6.

5.  Symptom‐relieving and neuroprotective effects of the phytocannabinoid Δ9‐THCV in animal models of Parkinson’s disease
— British Journal of Pharmacology
https://bpspubs.onlinelibrary.wiley.com/doi/full/10.1111/j.1476-5381.2011.01278.x

6.  Effects of cannabidiol in the treatment of patients with Parkinson’s disease: An exploratory double-blind trial
— Journal of Psychopharmacology
https://journals.sagepub.com/doi/10.1177/0269881114550355

7.  Cannabis use in people with Parkinson’s disease and Multiple Sclerosis: A web-based investigation
— Complementary Therapies in Medicine
https://www.sciencedirect.com/science/article/pii/S0965229917302340?via%3Dihub

9.  Survey on cannabis use in Parkinson’s disease: Subjective improvement of motor symptoms
https://onlinelibrary.wiley.com/doi/abs/10.1002/mds.20111