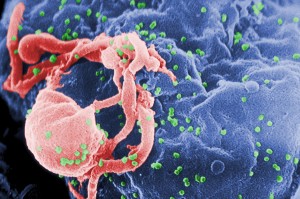 The standard HIV treatment regimen is antiretroviral therapy, or ART, which is a combination of medications. Cannabis is also used by many to treat complications from HIV, and as the history of its usage for HIV and the current research shows, medical marijuana has benefited patients and shows potential to become an officially recommended treatment.

Even as the HIV epidemic was taking hold in the early 80s, HIV and marijuana were hand in hand, as patients used it to try and offset their accompanying cachexia, AKA, HIV wasting syndrome. As physicians became aware of this, many began prescribing dronabinol, a synthetic version of THC, finding that it benefited those suffering from wasting syndrome. Since then, many patients and their doctors have found that it also alleviates nausea and vomiting, pain, depression and anxiety[1].

HIV and AIDS are sometimes confused. HIV stands for human immunodeficiency virus, but it can also refer to the infection itself. AIDS is acquired immunodeficiency syndrome and is the most advanced stage of the HIV infection.

The immune system contains infection-fighting cells known as CD4 T and CD8 T. The HIV virus attacks and destroys these cells, significantly weakening the immune system and resulting in the body being unable to fight off infections and certain types of cancers[2].

Many different drugs are used to treat HIV. Because of this, the combination has often been called the HIV “cocktail”. These drugs are grouped into several different classes, depending on what each one does and how it fights HIV. The patient’s ART will usually start with at least three medications from a minimum of two different drug classes. Which drugs are selected depends on the patient’s individual needs, the potential side effects of each drug and the possible interactions between them.

Today’s drugs significantly decrease the patient’s viral load and slow the progression of the disease. But the vast array of drugs that make up the HIV cocktail increases the chances of side effects, just a few of which can be fever, rash, nausea, or fatigue, dizziness, and insomnia[3].

Some patients have found that cannabis eases peripheral neuropathy, which can be caused by HIV. But the neuropathy can also be caused by some of the medications used to treat the resulting infections, such as dapsone, isoniazid and metronidazole[4].

In addition to these issues, HIV patients often have depression and anxiety, making it difficult for them to consistently keep up with their required therapy.

Medical marijuana may be able to help in the fight against HIV and AIDS in several ways. As discussed earlier, some of the first discoveries made by patients seeking relief were that cannabis helped relieve their pain, nausea, depression, anxiety and cachexia.

But in the years that followed, more benefits were discovered, both by the patients who were experimenting with cannabis, and by scientists.

A three-week inpatient study with HIV-infected patients that was done at the University of California San Francisco showed that contrary to popular belief, smoked marijuana did not cause suppression of the immune system.

In the three randomized groups, 20 patients smoked marijuana, 22 were given a synthesized THC called dronabinol, and 20 received an oral placebo. For the placebo group, there was no significant change in CD 4 or CD 8 T-cell counts. But, CD 4 T-cell counts rose by about 20 percent for the patients in both the smoked marijuana and the dronabinol groups. And interestingly, CD 8 T-cell counts in the group who smoked rose by 20 percent, while the CD 8 counts in the dronabinol group rose by 10 percent[5].

A study that was done using THC on the SIV virus (simian deficiency virus), which affects primates and is very similar to HIV, showed potential. In this study scientists found that the THC slowed the progression of the disease. It also lowered both the inflammation and viral loads, all of which reduced the mortality rate[6].

Many HIV patients attest to the efficacy of cannabis, such as the ones interviewed for the book, Marijuana as Medicine. One man shared how marijuana eased his pain, calmed his stomach that his medication had upset, stimulated his appetite and enhanced his mood. Another told how medical marijuana eased many of his symptoms, including keeping him from slowly starving to death and enabling him to once again, “…rejoin the human race.”[7]

While patients using cannabis may experience side effects, many find that those from their medications are worse. Still, it’s worth noting that cannabis can potentially cause its share of side effects as well. These may be dry mouth, insomnia, paranoia, fatigue, increased heart rate or slow reaction times, but it depends upon the individual. Some people have no side effects at all.

Different cannabis strains will also produce different effects. Indica strains tend to make people sleepy and hungry, while sativa strains are more likely to cause a state of alertness. If you are considering using cannabis for your condition, research the strains and their common effects, and if the laws in your state permit, work with a doctor who is experienced in this area. You can use our interactive map for more information on your state.