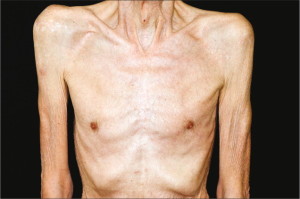 Cachexia, also known as wasting syndrome, is a severe consequence of many chronic illnesses. The disorder causes extreme, involuntary weight loss of both fat and muscle, often causing its victims who were not overweight at the onset of cachexia to appear almost skeletal. Those who were obese at its onset may later appear to be slim yet of normal weight. However, this does not indicate good health, as they too are suffering the same slow starvation.

Cachexia is a disorder that affects those who are in the late stages of many possible diseases, some of which are cancer, kidney disease, COPD, congestive heart failure, HIV and AIDS, Crohn’s disease, cystic fibrosis, and rheumatoid arthritis. Annually, the number of cachexia‐attributed hospital admissions in the US is estimated to be over 160,000[1].

If approved by a doctor, marijuana may be used to encourage appetite in patients suffering from cachexia. Marijuana may also help ease the symptoms of chemo and radiation therapy and generally improve the patient’s outlook.

Cachexia causes many additional complications for the already seriously ill patient. In addition to unhealthy weight loss, a patient receiving chemotherapy may experience increased side effects, leading to worsening symptoms from the original disease, and reduced immunity. Inflammation can run rampant in the body, and it is common for the patient to have severe fatigue, malaise, and poor quality of life.

Tumors create substances that suppress the appetite while at the same time speed up the metabolism. Thus, even if the person manages to eat nutritious, high-calorie meals, the cachexia won’t reverse. These substances also prevent muscle growth due to the release of the proteins, activin and myostatin. One area of research into the treatment of cachexia is that of possibly blocking these proteins, resulting in muscle growth[2,3].

Cachexia is usually treated with a combination of drugs, diet changes and nutritional supplements. Often an appetite stimulant such as megasterol is given, along with anti-inflammatories[2]. Unfortunately, these drugs come with their own set of side effects – some of the listed side effects for megasterol for example, are nausea, vomiting, pain, diarrhea, hypertension, asthenia (severe weakness due to a significant loss of strength and energy), rash, insomnia, anemia, fever and hyperglycemia[4].

Another drug that can be given for cachexia is dronabinol, a synthesized form of THC that helps improve both appetite and mood while fighting nausea. Dronabinol works by activating the CB1 receptor, producing hunger-promoting hormones[5].

Although medical marijuana and cachexia have not yet been extensively studied, there are a few studies that point to its effectiveness in helping to treat the disorder in several ways. One study that was done with patients who were afflicted with HIV and AIDS, compared smoked marijuana, dronabinol and a placebo. At the end of the study the patients had gained weight – 3.51 kg, 3.18 kg, and 1.3 kg, respectively.

Another study was done with marijuana smokers who had HIV. The results were that both marijuana and dronabinol caused substantial increases in appetite and food intake[6].

In a departure from THC, another study done with rats used the cannabinoid CBG and the chemotherapy drug cisplatin. The results were that the food intake by the rats given CBG was  modestly increased and their cisplatin-induced weight loss was significantly reduced, prompting the researchers to comment that, “CBG-based treatments may represent a novel therapeutic option for chemotherapy-induced cachexia.”

Although the synthetic form of THC has been shown to be helpful in these and many other cases, it too has caused side effects in some patients. In addition to some of the same side effects that the cannabis plant can produce, such as a “high”, red eyes, dry mouth, and paranoia, dronabinol has also been known to cause more severe side effects. Delusions, depression, blurred vision, chills, sweating, nausea, vomiting, faintness, and weakness are some of the side effects that have been reported[7]. It can take up to an hour to take effect and if your insurance plan doesn’t cover it, dronabinol is quite expensive[8].

Those who use medical cannabis note that smoked cannabis acts faster, bringing about nearly instant relief, and proper dosing is also easier to achieve. But there are many options when it comes to medicating with cannabis, as it can also be taken as a sublingual (under the tongue) tincture or mixed with a drink. It can also be taken as lozenges, sprays, or edibles.

There is a huge array of strains to choose from, some of which are effective in fighting fatigue, increasing appetite, and relieving anxiety. And, the cannabis plant contains other beneficial cannabinoids, plus its many terpenes with their own anti-inflammatory and antioxidant benefits⁸.

Indica strains can increase appetite – some, such as Gigabud and Platinum Purple Kush are described as causing a ravenous appetite and making people “crazy hungry.” There are indicas that also provide muscle relaxation, sleep, and reduced nausea.

Sativa strains can be uplifting and energetic, as well as provide pain relief, while the hybrids can combine the best of both worlds.

And for those who live in states where medical marijuana is legal to grow, it is a simple and inexpensive way to provide your own medication.

Of course, choosing either synthetic or natural means to treat cachexia, or any disease, is up to each individual patient. There are pros and cons to both, so the best thing to do is to be informed by educating yourself and, if you live in a state where medical marijuana is legal, finding a cannabis-literate doctor to help you. Be sure to check out our states map for information on legalities to help get you started on your journey.